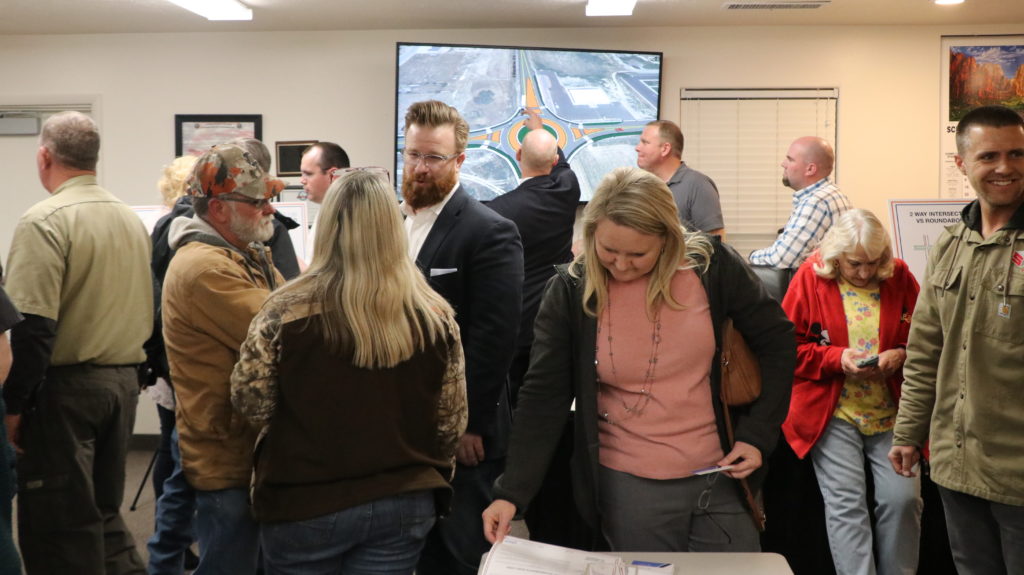 The crowd filled the conference room at the Enoch city offices where several Utah Department of Transportation officials and staff members were on hand to explain the various aspects of the $4.5 million project, which is scheduled to start construction this summer.

In keeping with the open house format, there were no official statements or speeches made to the public; instead, UDOT officials spent time talking to individuals and small groups as they made their way around the room, which had several informational poster board signs on display.

On one side of the room, a television screen played a video on continuous loop with an animated simulation showing traffic flowing through a proposed roundabout at the intersection of SR-130 (Minersville Highway) and Midvalley Road. The intersection is currently regulated by two-way stop signs on Midvalley Road, while the SR-130 traffic does not have to stop.

As previously reported in Cedar City News, the site has been the scene of multiple serious collisions in recent years, leading to efforts to find ways to make the intersection safer.

Although some in attendance indicated they would rather see a four-way traffic light installed at the site, Kevin Kitchen, communication manager for UDOT’s Region 4, told Cedar City News at the meeting that UDOT engineers believe a roundabout is a better option in this case.

“What we found is that the application of a roundabout for high-speed rural intersections is shown to significantly reduce serious and fatal injuries or crashes versus other methods,” Kitchen said. “That’s one of the primary criteria for a roundabout in this location. We believe that this is a better fit than a signal for that purpose.” 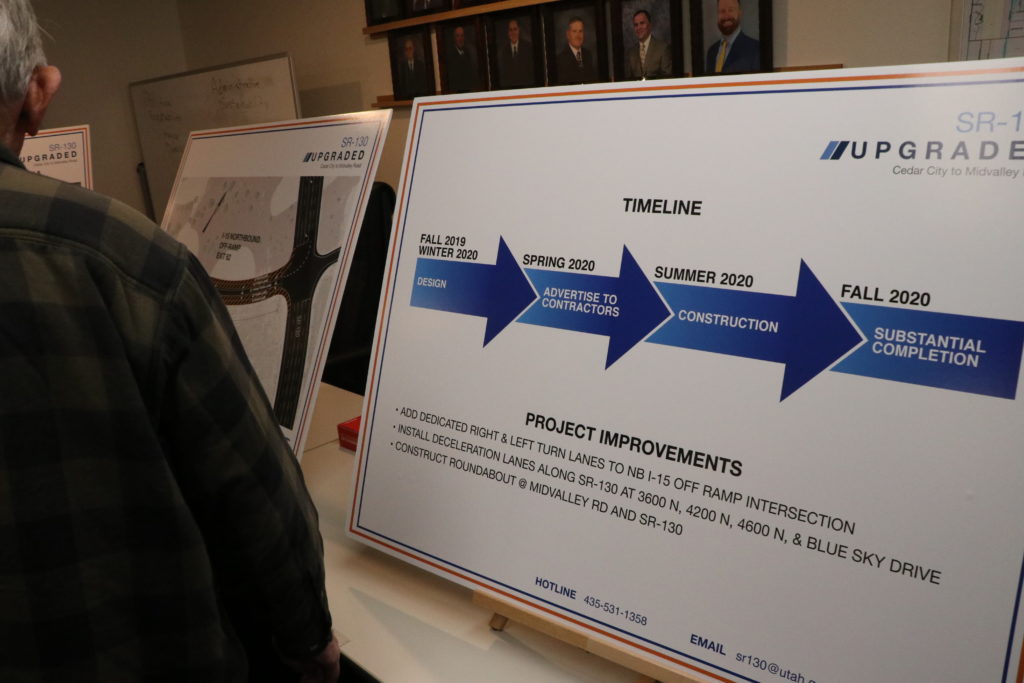 Kitchen said some have expressed concerned about larger freight trucks being able to navigate the roundabout.

“Some will have to track over some of that center portion on their rear wheels,” he said, adding that roundabouts are, “by nature” engineered to be traffic calming.

“You physically have to slow down as your approach to navigate it,” he said. “So that’s another pro to it. Some people will see that as a con. Some people would like to see a complete stop condition. Of course, we want to keep things moving if we can.”

In addition to the proposed roundabout, the federally funded project plans call for several additional improvements along a nearly 3-mile stretch of SR-130, including the following:

The project is still in its design phase but is expected to begin advertising bids to contractors by spring. Construction is expected to start in July, with substantial completion expected by October, officials said.

For more information about the project, call the project hotline at 435-531-1358, send an email to [email protected], or visit the project’s page on UDOT’s website.

Members of the public, including those living in or near the area immediately affected by the project, are invited to submit their comments and opinions before the official comment period ends Feb. 29.  Comments may be submitted via phone at 435-531-1358, via e-mail to [email protected] or via postal mail to Harmony Public Involvement, Attn: SR-130 Improvements, 620 N. Canyon Trail, P.O. Box 814, New Harmony, UT 84757 (must be postmarked by Feb. 29).

For questions about property issues, including right-of-way questions and possible compensation, click here.

Proceed with Order
We use cookies to ensure that we give you the best experience on our website. If you continue to use this site we will assume that you are happy with it.OkNoPrivacy policy